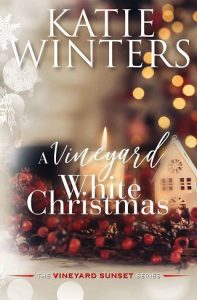 An injured army veteran. A near-fatal car accident. And a snow-capped Martha’s Vineyard Christmas—the kind that can mend any broken family.

Andrew Montgomery is the black sheep of the Montgomery family.
Seventeen years ago, Andy and his best friend, Kurt, took off for the army and planned to never look back. Once overseas, they realized the depths of their mistake. But once Kurt died in combat, Andy decided to turn his back on his past for good.
Years later, Andrew is bound to the US again with an injury. A phone call a few weeks before Christmas changes everything and beckons him home.
His father, Trevor Montgomery, has been involved in a horrible car accident. He might not make it.

When Andrew returns to the island, he finds himself in the center of so many ghosts. His siblings are all in their late-thirties and forties. Their children have grown up, some of them with children of their own. Andrew has missed so much, and he also realizes just how alone he’s been over the years. They still call him “Andy,” but they no longer see their baby brother—they see an injured vet.
And worse than that, Kurt’s sister and Andrew’s high school love, has lived so much of her life alone while raising a child with autism. Just one look in her eyes reminds Andrew of all the passion he once had for her. It isn’t gone.

As days pass, Andrew finds himself falling deeper into a world he once abandoned. He realizes just how much his siblings have needed him over the year — especially when it comes to Kelli’s verbally abusive husband and Charlotte’s husband’s death.
As they count down the days before Christmas, Andrew falls for the life he once hated. He learns to fight for his family members. And he searches for the right words to say to a father that he very nearly lost.

Can he find a way to mend his family, just as his cousins, the Sheridan sisters, have managed? Can he find love, even after so many years of darkness and pain?

Join the Montgomery and Sheridan family over a snow-capped, heartfelt, and emotional December on Martha’s Vineyard.