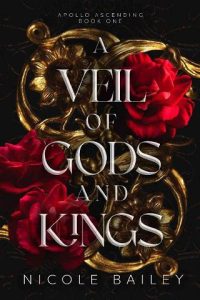 A god fighting his fate. A prince burdened with secrets. And a romance that could end in flames.

Apollo is a deity… almost. Half mortal and refusing to take his position as god of the sun, he spends his nights drowning out haunting memories and his days avoiding responsibilities.
Until his father forces him into an ultimatum:
Ascend immediately.
Or spend the year mentoring under the obnoxious Prince Hyacinth.
Forced together, Apollo and Hyacinth grapple with their mutual disdain for each other.
But what starts as a kindling of irritation begins to burn into something new. A spark that, if it turns to flame, could incinerate everything they’ve always protected.