Home
Fantasy
A Tune to Make Them Follow by T.A. Lawrence (ePUB) 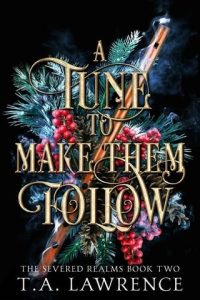 She’s a wanted criminal, but he doesn’t have to know that.
Piper’s job is simple.
Take the children.
Don’t get caught.
The rules she binds on herself; however… Well, they’re a tad more complicated.

Kidnapped as a child for her connection with the Old Magic—the one that grants her the ability to enchant others with her music—Piper knows good and well the rules of the Coup, the underground organization intent on bringing down the fae regime. As the Coup’s first “recruiter,” she’s supposed to take the strong, the good-boned, the clever, the healthy.
Except Piper doesn’t always do what she’s supposed to.
Instead, she makes a few rules of her own.
Like how she only takes the children who need taking—the children who suffer harm and neglect in their current homes, the ones who come with her willingly.
The children for whom a life bound in service to the Coup would be a mercy.
But when a deadly oversight leaves Piper injured, stranded in the forest, and unable to protect the no-nonsense child to whom she’s promised a better life, she’s left with no other choice. She strikes a bargain with a handsome archer whose aim is almost as deadly as his past.
Oh, but there’s another rule too.
Don’t fall in love.
Especially not with a human who has no idea who Piper really is.