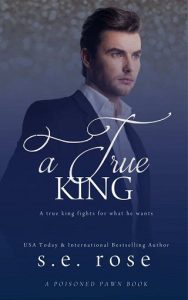 A FUTURE KING. A FORBIDDEN ROMANCE. A CENTURY-OLD SECRET.
WHAT A ROYAL FAMILY IS ABOUT TO FIND OUT MAY DESTROY THEIR MONARCHY AND EVERYONE THAT STANDS IN THE WAY.

The royal staff are off-limits. It was a simple rule, but when Mia Edgewater walked into Prince Christian’s office to interview for a position as his assistant, that rule was all but forgotten. The two fell madly in love until the palace sent away all the staff following a security breach. Angry, but resigned to follow palace orders, Mia left.
That was two long weeks ago. Mia hasn’t responded to a single text or call. Prince Christian decides to take matters into his own hands and show up at Mia’s family home. He’s determined to talk her into giving him second chance. Only when he does, she isn’t there.
As Prince Christian starts to look for Mia, he doesn’t know he’s about to find a threat greater than any his family has faced. He’s about to unravel a mystery so dark, so insidious that he may soon question who he can trust. And at the heart of this secret, is Mia.
Can he find her before it’s too late? Can he even trust her when he does? Or will a hidden enemy kill his one true love and his chance at becoming king?