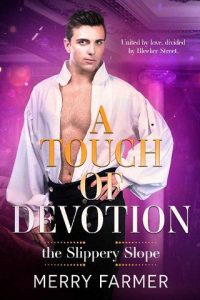 United by Love…
As bartender and part-owner of The Slippery Slope, Alonzo Russo has made a name for himself as one of the most influential men in The Bowery. He has worked his way up from poverty to prosperity and his future looks bright. All he needs is someone to share his life with, and that someone is Ricky.
… divided by Bleeker Street
Ricky DeMarco wants nothing to do with the life he used to live or the world he was raised in. So much so that almost no one knows what that life was or who he used to be. He is content to work as a bartender at The Slide, and he’s grateful that his boss there, Jonathan, saved him from utter disaster all those years ago. Jonathan has just one condition to keeping all of Ricky’s secrets—don’t go anywhere near Alonzo Russo.
But when Alonzo and Ricky are thrown into close quarters when the future of both clubs is in jeopardy, they can’t fight the attraction that brings them together…and could tear them and everyone else apart. It’s a Romeo and Juliet situation with all the potential to end just as tragically, unless love wins the day.