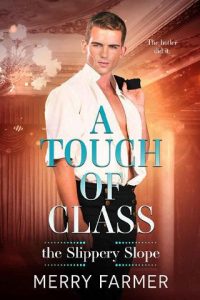 The butler did it…
Uptown industrial heir Kelsey Jamison III has been born into wealth and privilege, and it has made him completely miserable. Driven by guilt, neglect, and self-loathing, Kelsey lives the most self-destructive life he can as a way to seek revenge on his villainous father. He is caught in a vicious downward spiral, until help comes along in the most unlikely of men.

…but he had an accomplice…
There is nothing at all wrong with Robert Merriweather’s life…except for the fact that it is hollow and loveless. At least until he takes up the offer for a night of passion with the young man he’s had his eye on at The Slippery Slope for months. “Grace” is everything Robert has ever wanted in a lover—passionate, submissive, and beautiful. Robert is happy to carry on with his new friend without either of them knowing a thing about who the other really is.

…and now they’re both in trouble.
Kelsey’s and Robert’s worlds come crashing together when they come face to face in their ordinary lives. Even worse, when Kelsey’s father demands that he marry his rival’s daughter, Robert is the one who has to plan the wedding. Can the two lovers wrestle themselves free from the bonds of class and duty, or will lives be ruined in the name of a business deal?