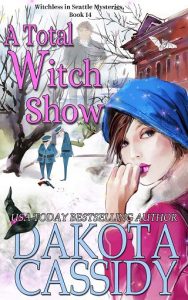 Hello, it’s me, intrepid amateur sleuth, Stevie Cartwright back in the saddle again!
An intrepid amateur sleuth who’s being hunted.
Yep. This time I’m the case that needs solving. My most recent past has come back to haunt me. What I mean by that is, almost every single criminal dead or alive that we’ve captured or we’ve had a hand in doling out their fate, have been stalking me via the ghost of my very first case.
Sal Finch.
Remember him? Win’s vengeful cousin, angry and bitter when he lost all of Win’s inheritance to me and tried to kill me, has somehow figured out how to read people on this plane and get them to do his bidding. So far, I’ve been the recipient of a black eye, I’ve been shot at, and someone tried to blow me up! So how do I, mostly a mere mortal, fight off someone from the afterlife still holding a big, fat grudge?
I call my sister Halliday Valentine to help me fight off the forces of evil, of course! A full-time witch who has visions, and part time sleuth just like me. But the afterlife sure has drastically changed since I lost my powers, and everyone around me becomes suspect as Sal whispers suggestively in the ears of criminals who would like nothing better than to see me kaput.
So when things get so bad, my sister Hal has a vision of me, a mere dead husk of a body, my soul evaporated for eternity, we know we have to take action and call Sal out with the mother of all spells. But with the afterlife in such an uproar, and the delicate timing of the spell, will we get this monkey off my back, or leave the world turned upside down?