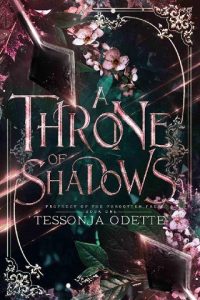 A feisty outlaw.
A conniving prince.
A war of magic and shadows.

Wanted by the crown for a murder she didn’t commit, Cora dreams of getting revenge on the mage who framed her. In the meantime, she hides in the forest and hones her magic. But when she discovers her enemy’s violent hunt for faerie creatures, she forms a plan for vengeance.
Prince Teryn, heir to a bankrupt throne, will do anything to keep his country from sinking into ruin. When he meets a feisty outlaw wanted by a neighboring kingdom, he gets his chance. The woman has an impressive bounty on her head, one that could pay off his kingdom’s debts.
If Teryn can help Cora save a few magical creatures, he can gain her trust, hand her over to her king, and collect the bounty. But Cora has plans of her own, and none of them include being betrayed by her handsome new traveling companion.
The closer Cora and Teryn get to their desires, the harder their tasks become. And it isn’t just their budding attraction that’s the problem. A secret war is coming, one stemming from ancient feuds and forgotten fae magic. They must work together to stop it, or else both their kingdoms will crumble to ash.
NOTE: A Throne of Shadows was previously published as an earlier edition called Shadows of Lela. This updated edition has been fully rewritten and includes some plot changes, name changes, and other modifications from the original. The original edition is unpublished as of spring 2022.