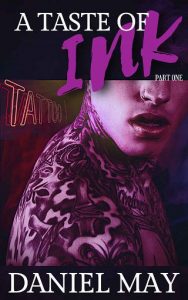 A Taste of Ink by Daniel May – Free eBooks Download

Only two men were allowed to touch him — his possessive boyfriend, and the dangerously charming tattoo artist hired to put that boyfriend’s artwork under his skin.

Trinket was a virgin before he met the affluent architect Siebold ‘Zee’ Li, a fact he managed to keep under wraps for two years of domestic bliss. Siebold is a devoted boyfriend, but he leaves Trinket feeling like arm candy among his upper crust colleagues. Shy and a little prudish, Trinket struggles to balance his own pleasure with keeping Zee interested, until he finally hits on the idea of a tattoo to commemorate their anniversary.

When the tattoo artist, a heavily-inked bad boy archetype called Mini, lets Trinket stick around after hours, Trinket thinks nothing of it… until Mini introduces him to the barbell on his pierced tongue. After a steamy encounter, Trinket comes home inked and flustered, and effortlessly blows his boyfriend’s mind.

In the heat of the moment, Zee confesses his secret desire: he wants Trinket tattooed from head to toe, his name between Trinket’s legs and his designs all over Trinket’s body, under his clothes where only Zee can see. Trinket agrees. The idea of being marked with his boyfriend’s designs thrills him… almost as much as the idea of seeing that tattoo artist again.

A Taste of Ink (Part One) is a 30k word smutty rollercoaster, propelling readers into the Taste of Ink series at lightning speed. This book contains cheating, kinky sex and does not end with a HEA/HFN but leads directly into part two.