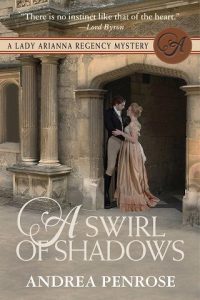 A traumatic personal crisis has left Lady Arianna bedeviled by guilt and questioning whether she has lost her nerve. Saybrook and her circle of friends can’t seem to help rekindle her fire. Even a challenge from Lord Grentham, Britain’s shadowy head spymaster, to undertake a vital mission to Russia in aid of her old friend, Tsar Alexander, fails to spark any interest . . . Until Grentham mentions that Arianna’s half-brother has gone in her place and may be in mortal danger.

Arianna is furious. She only recently discovered that she had a sibling when her father’s illegitimate son was recruited to play a small role in their previous mission. Resentful of the minister’s attempt to manipulate her emotions, she still refuses to be drawn back into the fray.

But when the murder of a mysterious Russian baroness in London entangles her friend Sophia in the byzantine intrigue surrounding a stolen Imperial medallion and a legendary curse that may topple the Tsar from his throne if it’s not recovered, Arianna finds she can’t turn her back on family and friends—especially as the tensions within her closeknit circle are threatening to fray the bonds of all she holds dear.

And so Arianna and Saybrook—along with Sophia—head off to St. Petersburg, where dangerous deceptions and duplicity swirl beneath the sumptuous splendor of the Imperial Court. An American adventuress, an old nemesis, a possible traitor within their own allies . . .Suspects abound—treachery is everywhere, and when her brother goes missing, Arianna know that for her and Saybrook to have any hope catching the cunning conspirators, she’ll have to learn to trust herself again. But the clock is ticking . . .