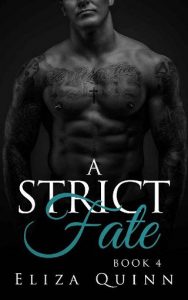 Haden Roy is in Michigan to take back what is rightfully his—Tatiana Edwards.

All thoughts of fixing things up with his ex are destroyed when a terrified blonde throws herself into his car. She’s all big terrified eyes, sexy perfume, and breathless excitement. When she tells him what’s going on, he’s ready to protect her.
He’s not going to let some monster harm her.
All his plans dissolve and he finds himself suddenly involved with this stranger. Chance and circumstance brought them together; but the more time he spends with her, the more he craves her presence. Can he get past her doubts and fears and win her heart? Because she’s helped him realize something very important; what he had with his ex was just physical. Which means what he has with Cathy is real.

Cathy ditches her bodyguards to meet up with a guy at a club. It’s the worst mistake of her life.
It wasn’t always like this—she was a normal college student only a few months prior. But then her wealthy step brother appeared on the scene with promises to take care of her because they’re family. With that promise and his wealth, she found her friend circle suddenly doubling and tripling overnight.
Cathy isn’t an idiot; she knows they want the family money. Not her.
Tonight was supposed to be different. This guy wasn’t supposed to know her, but he did. And he wasn’t taking no for an answer. Cathy wasn’t going to let the guy do what he wanted. She was going to fight. Run. Throw herself into a stranger’s car and pray he was less evil than the man chasing her.