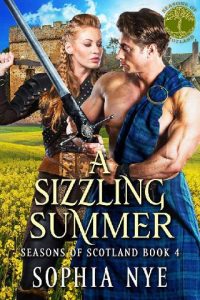 When two Highland warriors meet in battle, they both lose their hearts.
She captured his castle…
A force to be reckoned with, Deirdre MacCready has all the skills of the fiercest Highland warrior. As the best swordsman in Clan MacCready, she’s well on her way to becoming war chief of the clan. But when Deirdre sacrifices her own safety to protect her men, she is taken captive by an enemy warrior.

He captured her heart.
When Donnan marched to battle against Clan MacCready, he knew he’d need to prove himself in order to impress the king. He never imagined he’d be lucky enough to capture an enemy commander. Things begin to unravel, however, when he realizes the warrior he’s holding hostage is a woman. A beautiful, frustrating woman, unlike anyone he’s ever known.
Can love conquer loyalty in a war for the throne of Scotland? Pitted against the greed of two kings, Deirdre and Donnan must overcome the odds in their quest for a life shared in love. Will they rise to the challenge? Or will the hardships of war end their relationship before it takes root?