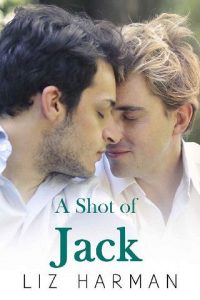 Jack’s a sweet, outgoing bartender with a penchant for high-maintenance drama queens.
Campion is the intense, dramatic, and socially awkward florist next door.

Everyone Jack had ever dated was a high-maintenance drama queen, and it never worked out. But the guy next door might just be too hot to pass up. Jack had fallen for Campion the moment he met him. He was exactly the sort of guy Jack liked. But the sort of guy Jack liked always ended up hurting him. Besides, Jack’s never seen Campion date a guy.
Campion wanted nothing more than to love and be loved. But every relationship he ever had fizzled. So despite his feelings for Jack, he was afraid if he asked him out, it would make things awkward since he worked right next door. Besides, he was pretty sure he was losing his mind like his cousin had, and Jack didn’t need that kind of baggage.
Jack had gotten his hands full helping plan his best friend’s last-minute wedding. But when Campion totally lost it one night, Jack was there to pick up the pieces. Now, can they finish the wedding plans and keep Campion safe and more importantly sane at the same time?