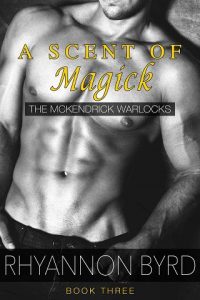 When the McKendrick elders begin placing “mating” curses upon Blu’s cousins, the Warlock knows his turn is coming. Soon he’ll be driven to bond with his soul mate—the one woman who can lay claim to his heart and make him crazed with a dark hunger no other can satisfy. Unfortunately for Blu, he already knows who she is—and there’s not a chance in hell he can claim her. No, the delectable Kaia Gentry deserves far more than the heartache Blu fears he would cause her, even though his need for her is tearing him apart.

Determined to thwart his family’s plans, Blu tries to protect himself, only to have his elders best him by placing his curse right under his nose. Now the scent of every woman makes his stomach pitch like a ship on the high seas. Every woman, that is, except for Kaia, the irresistible Pixie who makes him ache—who haunts his every waking hour and torments his dreams. And when her life is threatened by an unknown evil working against the McKendrick clan, Blu must finally choose between facing his demons…or forever losing the woman he loves.