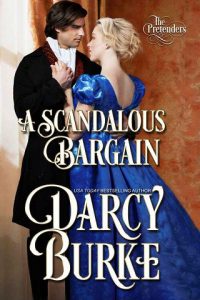 A Scandalous Bargain (The Untouchables: The Pretenders #2) by Darcy Burke – Free eBooks Download

From the bestselling author Darcy Burke, your next Regency obsession: The Pretenders! Set in Burke’s popular world of The Untouchables, indulge in the saga of a trio of siblings who excel at being something they’re not. Can a dauntless Bow Street Runner, a devastated viscount, and a disillusioned Society miss unravel their secrets?

Tricked into marriage five years ago, Thomas Devereaux, Lord Rockbourne is suddenly a widower. Rumors abound that his wife’s death may not have been an accident and given the troubling secrets Thomas keeps buried, even he isn’t entirely sure. But when a woman sees what happened, he agrees to accept her help to disguise the facts in exchange for not divulging her suspicious behavior. Their arrangement grows more complicated under the force of a scorching mutual attraction.

Abandoned by her father—a duke—after the death of her mother—his beloved mistress—Beatrix Linley has fought to become a daughter he could be proud of, that he would regret leaving. She becomes the toast of the Season until her penchant for pilfering pretty things threatens to expose the illicit past she needs desperately to remain hidden. Soon the scandal and darkness both Beatrix and Thomas fear comes to light, compelling them to finally face their demons—and potentially driving them apart forever.