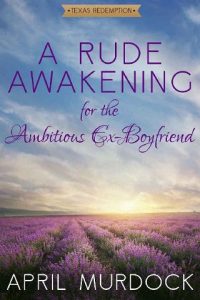 Dr. Amber Crawford has dedicated her life to caring for others and she’s determined to leave a legacy that her mother would be proud of. This path, though noble and worthy, leaves no time for a love life. Truthfully, she’s okay with that since the only man she ever cared for shredded her heart and left her in the gritty Texas dust.
When Amber runs into hunky Troy Sykes almost ten years later she wants to vanish and pretend he never existed. But before she can sneak away, he sees her and it’s too late. And just like that, she’s agreed to have dinner with him.
He turns on his signature wit and charm and she’s soon under spell again. He seems different than the college boy who dumped her without a look back. She believes he’s matured and learned the value of treating others well. He’s a respected attorney, so of course he gets it now.
Just as Amber is falling for him again, he unceremoniously breaks things off. He’s ruined her trust in him twice.
Bitter and angry, she throws herself back into her work. Knowing she should have trusted her instincts, she takes a breath and moves on.
But when Troy’s career and life takes a monumental dive, he turns to her for help. She’s insulted he’s asking for her help. The nerve of this man!
Her conscience won’t allow her to ignore someone who needs help.
Will she allow Troy to destroy her as he tries to pull himself together? Or will this experience bring them together as he finally sees what he should have seen all along?
Everything’s bigger in Texas. Even redemption.