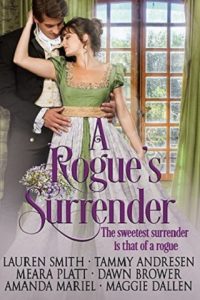 Six tantalizing stories of love where these ladies tame the rogues of Regency England.

Tempted by a Rogue by Lauren Smith:
A naval officer is desperate to win the heart of a woman who’s in love with his best friend through a decade of mysterious love letters.

Taming a Rogue Earl, by Tammy Andresen:
The earl of Loudoun is all Miss May Stanley has ever wanted but he is the one man she can’t have.

The Duke Next Door by Meara Platt:
Lady Mallory has been in love with her handsome neighbor Lucien, the Duke of Hawthorn, ever since she was a little girl. But Lucien’s father has left him a ducal estate in ruins and Lucien needs to marry an heiress to save it. The last thing he needs is to fall in love with Mallory, the sweet but gangly girl who’s suddenly turned into a beauty. Unfortunately, his heart won’t listen.

Enchanted by the Earl by Amanda Mariel:
Rose Woodcourt, a poor seamstress, is too proud to accept help, even when her home and freedom are threatened by the nefarious Mr. Wolfe. Especially not from Hunter Thorne, a titled gentleman far above her station. Earls only court common misses for one reason, and Rose has no interest in being a wealthy man’s mistress–however handsome and charming he may be.

Scandalized by My Prince by Dawn Brower:
Aubriella Byrne isn’t the adventurous sort, but she risks everything for a gentleman she believes needs her. Killian Lynwood, Earl of Thornbury finds her wandering the lands outside his castle. She has a frailty that makes him want to protect her. Aubriella isn’t sure if she should tell him who she is and lies have a way of unraveling. Trust doesn’t come easy for either one of them. Sometimes love isn’t enough and their secrets might destroy everything.

The Reluctant Bride by Maggie Dallen:
Lydia will do anything to save her brother, even marry his kidnapper. But Gabriel vowed years ago that he would protect his best friend’s little sister at any cost. Now the time has come to make good on that promise…even if that means marrying her himself.