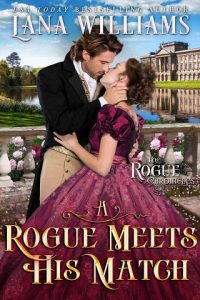 Despite longing for a love of her own, Margaret Gold has no intention of marrying as she’s needed at home to help care for her ailing father. However, she can’t resist offering her opinion to her best friend’s brother when he wades into the Marriage Mart. But there is more to the handsome if irksome rogue than she realized. Much more. She soon finds herself hoping for his kiss and wishing her future’s course wasn’t already set.

Edward Adley, the new Earl of Wynn, is determined to put his roguish ways behind upon his father’s death. The debt he inherited in addition to the title require him to marry an heiress, and the sooner the better. But he intends to choose with care to avoid an unhappy marriage like that of his parents. He certainly doesn’t need advice from his little sister’s best friend on potential brides. Yet Margaret’s intelligence and wit, not to mention the passion she stirs in him, have him reconsidering what he wants.

Margaret tries to set aside her blossoming attraction for Edward and suggests the perfect debutante for his consideration. Yet her heart aches for more. Edward knows marrying Margaret won’t solve his financial woes, but it would allow him to follow his heart. If only he can convince her to consider him. Will one misstep steal their chance for a happy future?