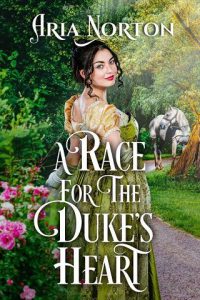 Laura Pike is not the quintessential English maiden people would imagine. She has never wished to become a lady, but rather enjoys being different… In fact, what keeps her happy is being outdoors and caring for her father, as well as spending most of her time with Patience, her horse. Little did she know her serenity would be disturbed for good when a runaway horse would appear at the bottom of the cliffside along the ocean. Her heart skips a beat though, when she sees its charming owner, Duke Owen Ellis of Blackmoor Manor. In her experience, all dukes are callous and deplorable examples of human beings, but upon first impressions of him, Laura is left feeling rather enchanted and therefore confused. Will Laura overcome her fascination caused by his enigmatic but warm presence, or will she allow her overwhelming feelings to blossom?

Lord Owen is the only heir of the Ellis name and Blackmore Manor following his father’s death. As for his mother, it was expected that her wish for him to marry Lady Marjorie Fielding, a spoiled London heiress, would be fulfilled. Life has other plans for Owen’s heart though, as when Laura is brought on as an equestrian trainer and tamer, he encounters warmth and affection for the first time. However, how could he betray his family’s expectation of marrying Lady Marjorie, who despite appearing pretty on the outside, is rather cruel on the inside? A dilemma awaits him, as the journey of becoming the man his father always wanted, would inevitably involve hurting the first woman he ever loved… In the end, which path will he choose?

Forced to choose between love and duty, the future is foreshadowed uninviting, unless Laura and Owen can find a way to overpower whoever tries to keep them apart. Will their love and devotion prove that their romance is unassailable? Most importantly, how could they both find the courage to ignore tradition, and not dismiss their hearts’ one true calling?