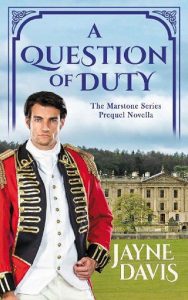 A Question of Duty (The Marstone #0.5) by Jayne Davis – Free eBooks Download

Is a man’s duty to his family or to the woman he loves?
Albany, 1760
Returning home from his post in the Colonies, Captain Jack Stanlake finds himself a reluctant escort for Mrs Harper and her two daughters. Over the course of the Atlantic voyage, he finds himself taken with Miss Clara Harper. Mrs Harper is set on finding husbands for her daughters—but that is not what Clara wants. Doing the bidding of a husband does not appeal in the least; not when there is a world out there she wants to discover. But after spending time with Jack, her feelings on the matter change.

There is, of course, a problem. Jack is the second son of the Earl of Marstone and Clara is a merchant’s niece. For one of his background, marrying into trade just isn’t done. Both must move on. Clara busies herself with her new life in London. Jack tries to push his feelings aside. But neither can forget the other. To Jack’s dismay, his brother has arranged a suitable marriage for him in his absence—one that will advance his family’s status and prestige. His duty to the family demands he accept this union, but he cannot dismiss Clara from his heart and mind. Will he refuse his duty and marry for love?

A Question of Duty is a prequel novella to the Marstone Series, taking place seventeen years before Sauce for the Gander (Book 1). While it’s perfect for fans of the series, it can also be read as a standalone story.