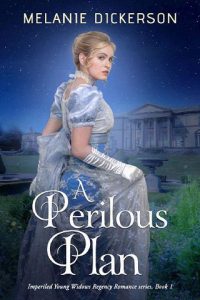 Penelope Hammond finds herself a widow at the age of twenty-three, having been married five years to a man she barely knew. Her husband, David Hammond, Lord Hampstead, was a member of the House of Lords who rarely said more than a few words to her in a week’s time–and often did not come home at night. But Lord Hampstead was from a wealthy, powerful London family with no enemies, so why was he murdered?

Penelope is a penniless widow with few friends and only her cold grandmother to lean on. When she finds herself pursued by both English officials and French spies, she doesn’t know who to trust—until a handsome Member of Parliament, Henry Gilchrist, saves her from being attacked and kidnapped. Mr. Gilchrist seems so determined to help her, but can she trust him?

Henry Gilchrist seems to know more about her husband than she does–that he was unfaithful to her with a young Frenchwoman who Penelope thought was her friend, that his gambling problem had sunk him deeply in debt, and that he had stolen some very important plans that could put the entire country in danger. And now both the French and the English governments think she knows where these plans are.

Penelope had no idea that her husband stole secret plans and intended to sell to the French, but no one seems to believe her, except Henry Gilchrist. When she starts to fall in love with the handsome young Member of the House of Commons, will he be too embittered from a former lost love to accept his own growing feelings? But first they must save themselves from those who would do them harm, or there will be no future for them, either together or apart.