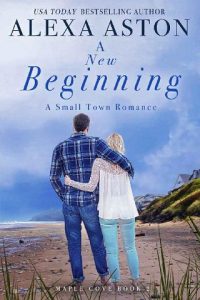 A woman who learns her marriage was a sham. A man widowed in an instant. Two damaged souls who unexpectedly find love . . .

Tenley Thompson came from a broken home. Raised in poverty, she puts herself through college and lands a prestigious job at a New York publishing house. She weds an old monied Wall Street stockbroker—only to learn her husband is a bigamist. Fleeing New York, she goes to Maple Cove, where her college roommate lives, hoping a visit to the quiet Oregon coastal town will bring her solace and help her complete the novel she has started.
Firefighter Carter Clark lost his pregnant wife to a sudden aneurysm five years earlier. He is ready to shed the shadow of mourning and begin to live life again. When introduced to Tenley, the sudden, sizzling attraction gives him hope that he has found the soulmate he has longed for.
Though reluctant to become involved so quickly after her annulment, Tenley is drawn to the handsome firefighter, realizing he’s one of the good guys. Their whirlwind romance is celebrated by their friends, but it doesn’t sit well with one citizen in the Cove.
Will Tenley run to protect the only man she’s ever loved—or will she stay and fight for Carter and the happiness they both deserve?