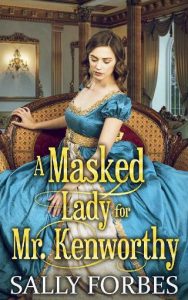 Can a misunderstanding lead to true desires of the heart?

Faye Winters is the only daughter of the late Earl of Welborn. She is shocked when she discovers that her father has left her and her mother in a dire financial situation. Her father’s distant cousin Mayson Winters arrives in London after inheriting the title of the Earl of Welborn. The ruthless Mayson threatens the wellbeing of Faye’s ill mother unless she agrees to befriend the Marquess of Turlington. At a masquerade ball hosted by the marquess, Faye encounters a mysterious gentleman and soon finds herself embroiled in a world of espionage and danger.
Thomas Kenworthy works as an agent of the crown for the British War Office. He has been tasked with a mission to uncover what the Marquess of Turlington is hiding. During a masquerade ball, he encounters a mysterious lady who he assumes to be a French spy. Thomas soon discovers that there is more to his current mission than protecting Great Britain. Will he be willing to risk it all and put his heart on the line?