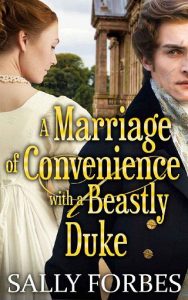 Cecily’s illness made her lose her vision. She is a blind lady with love for life but fear for a lonely future in spinsterhood. A marriage proposal from the notorious beastly Duke of Archington could be Cecily’s salvation, or maybe not?

Six years ago, Lady Cecily Derrick had her come out into London’s High Society. The evening proved to be a disaster as she stumbled into a waiter carrying a tray of champagne flutes. That night changed everything for Cecily as shortly afterward she was diagnosed with a rare illness… one that over time would leave her blind. She has made peace with never marrying and remaining a spinster for the rest of her life. Cecily and her family have recently returned to London for her younger sister Agnes’s debut. However, Agnes is reluctant about marrying as she doesn’t want to leave Cecily. But Cecily refuses to hear a word of it and encourages Agnes to make the most of the Season.
Five years ago, Val Archer—The Duke of Archington—withdrew from Society after he was left severely scarred on the left side of his face. To make matters worse, his beloved Lady Jocelyn called off their betrothal. Val has spent the last four years in the Far East to escape the ton’s scrutiny. He returns after receiving word from his mother who wishes for him to settle down and marry. But who would want a hideously scarred gentleman for a husband? Everything changes when Val encounters Cecily at a dinner hosted by his mother.
Val and Cecily agree to a marriage of convenience which soon turns out to be something more. But Cecily and Val are confronted by their emotional insecurities as they grow closer. Will they get their happily ever after in the end?