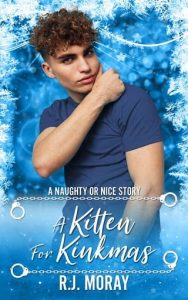 A sweet American boy and a sexy Aussie Daddy get hot and heavy Down Under for the holidays. Can some kinky kitten play bring them together or will Christmas be ruined by heartbreak?

Somehow when he booked the tickets, cheeky American tourist Luca never realized he’d be spending Christmas in Australia. Between the sun, the surf, and the shorts-wearing Santas, he’s culturally shocked. But not as shocked as he is when his first glimpse of the perfect Daddy hits him like a bolt of lightning from a blue summer sky. Christmas just got a whole lot hotter.
The only problem is that this sexy older man is kinky as hell, and Luca’s about as sweetly vanilla as vanilla-bean ice cream. Isn’t he?
Zoltan has been in the kink scene long enough to know what he wants—someone who already knows who they are. So when a cute American boy falls into his lap at a Cuffd Kinkmas event, he tells himself he’s not interested in breaking in a newbie. The temptation is strong, though, and Zoltan finds himself captivated by this young man’s first discovery of what really turns him on. One pair of kitten ears later, and Zoltan can’t deny that he wants this boy, even if it’s just for one night.
But one night isn’t enough, and soon he’s grappling with the gap of age and experience that lies between them. Because despite everything in the way, Zoltan can’t help feeling like this kinky kitten could be the One.

A KITTEN FOR KINKMAS is a gift-wrapped treat of sizzling age gap Daddy romance, with a HEA and lashings of cute kitten play. This book is part of the Naughty or Nice Season Three multi-author series. Each book can be read as a standalone, but there are so many Daddies and boys finding their happily ever afters, why not grab them all?