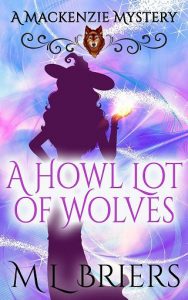 Kenzie didn’t want to go home to visit her mother and grandmother, but how much guilt could a witch take? Her small town, home town, didn’t look much different on the surface, but boy, was there something going on?

With an ex-husband who’d traded her in for a younger model, a job in a biker bar, and facing some midlife blues, Kenzie thought she was done with surprises, but fate wasn’t playing ball.

Not only had her grammy given permission for a pack of wolf shifters to move in next door, but people from her school days had become a lot furrier than they used to be. There was a big, bad werewolf in town, and it had gotten its fangs in some familiar faces.

Caught between a wolf shifter mate, a vampire, and some bloodthirsty werewolves, Kenzie’s life was about to get complicated, and that was without the meddling kin that could make her life hell. It was bad enough that people started dying, but her mother had set her up on a blind date with a guy who worked in a bank. What was a witch to do?