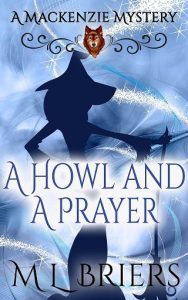 When you kill the big, bad alpha werewolf, you’d expect the rest to run for the hills, but that didn’t happen.

There was a new witch in town, and she was kicking up quite a fuss. Kayleigh had decided to surprise her two best friends, but the joke was on her when she bit off more than she could chew with one wolf shifter.
Kenzie was getting the hang of farm life while the vampire, Vic, was busy burying bodies and trying to protect his friends, Dee included, who was taking flack from the new alpha. All Vic needed to know was who the alpha was, and he would take them down, even if that alpha was Johanna.
Sometimes even the best-laid plans didn’t go the way you wanted, and Vic hadn’t planned at all. Trouble was brewing, and the body count was getting higher, and small-town life sure wasn’t as laid back as it was supposed to be.