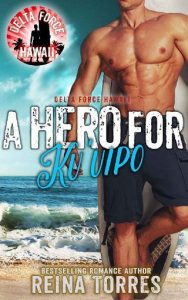 Her dreams kept her in Hawaii when most of her friends moved to the West Coast to follow theirs. He was on the island of Kaua’i training with the other Deltas in his unit until he fell head over heels for the woman of his dreams.

Ku’uipo Ornellas has been working most of her life. Starting as a professional hula dancer when she was a child, she just resigned from her job as hospitality coordinator for a large chain hotel to revive a hotel from Hawaii’s silver screen past. Hoping to give young residents a practical place to learn their hospitality skills. But someone doesn’t want the hotel to reopen and they’re willing to take out their frustration on the young woman so dedicated to its success.

Efrain ‘Train’ Figueroa is a man who loves his movies and tv shows, but within hours of meeting the young woman with a sweetheart of a name, he finds himself drawn into her single-minded goal of getting the hotel up and running. Especially because one of his acting idols filmed on the grounds. When the seamier side of Hawaii tries to take her dreams away, he’s quick to jump in and help. He just can’t seem to walk away from the beautiful young woman who calls to a part of his soul that has nothing to do with the ephemeral quality of movies and everything to do with the heart that beats hard and fast in his chest.

There’s no script that tells the tale of their love, but who can resist a beautiful heroine, a handsome hero, action, adventure, and love. Lots of love when ‘Train’ becomes a Hero for Ku’uipo.