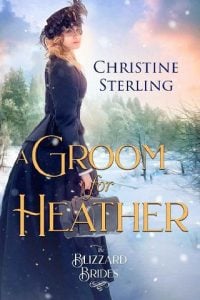 When Heather Barnes loses her beloved husband to the terrible blizzard that claimed so many lives, she must decide where her future lies. It was her husband who led all the men to their fate, and now she feels responsible that the women must remarry so quickly. The last thing she wants is another husband, but taking care of the farm, hunting, the butcher shop and being mother to two orphan children, is too much for the woman that is also the town’s midwife. What she doesn’t count on is a travelling gunslinger making her question all her choices.

Dalton James broke his engagement to chase after his brother’s killer. Five years on the frontier have roughened him into a man that legends are made from. Now, instead of chasing outlaws, he envisions a life where revenge and traveling are no longer necessary. When he offers his services as a hired gun to a town filled with widows, he didn’t count on finding his future so quickly in the form of a blue-eyed lady doctor. When the object of his affection has decided she isn’t going to marry any man, can Dalton convince her to stay and take a chance on a new future with him?

What happens when a secret Dalton has been hiding comes to light, putting his love and the women of Last Chance in danger? Will Last Chance become a second chance at love for Dalton and Heather?