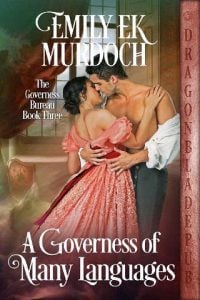 When a governess of many languages is required, there is only one place the nobility of England go: the Governess Bureau.

Of course, Miss Elizabeth Fletcher doesn’t broadcast that information – nor that she is an expert in the care of twins. Constantly under-estimated and treated like the children she’s responsible for, all she wants is a duke assignment and the respect of her peers.
Stuart Morton, Lord Galcrest, is having none of it. Giving her the nickname ‘the mouse’ when he hires her as a joke for his friends, he’s never taken life seriously and doesn’t want to start now. But when they arrive, bickering, at the home of the duc d’Allaire, everything changes. There’s a mysterious rift between their hosts, and both Elizabeth and Stuart are plunged into situations neither can control.
What they don’t know, of course, is that Elizabeth speaks many languages. Assuming she cannot understand, secrets are spoken before her which start to hint at something scandalous…
Unable to untangle why her mistress loathes her, and forced to entertain her master’s guests, Elizabeth grows increasingly furious with the man who brought her here. Such a shame he’s so handsome, and stealing kisses from her when she should be attempting to keep a pair of prankster twins under control.
As scandal suddenly rocks the d’Allaire family, Elizabeth is forced to choose: help rescue the reputation of her master, or leave Stuart to fix the mess he’s inadvertently created.
The house party is about to begin…