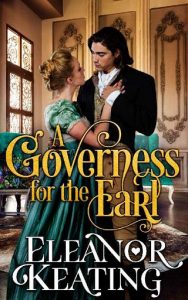 A Governess for the Earl by Eleanor Keating – Free eBooks Download

After spending all her life in England, the very last thing Amelia Pridham wants to do is to leave. So, she decides to decline her sister’s offer to go to America with her and instead, looks for a position as a governess in order to take care of her father.

Amelia sees an advertisement put out by the Earl of Hawkchurch, she thinks it’s perfect. But when her sister points out the oddness of the advertisement, Amelia begins to wonder if she was applying for the role of a governess, or of a wife.

With his sister now married and moving to Kent, Josiah Hardington faces having to take care of his children alone. Still recovering from the death of his wife, he decides to take his sister’s advice to hire a governess. The advertisement he puts out brings one terrible applicant after another but when he meets Amelia, taken aback by her graceful beauty, Josiah believes she was sent by his sister-in-law as a potential suitor.

An untimely misunderstanding leads to a blooming romance where two people with conflicting personalities fall in love. But with obstacles falling in the way, will they have the strength to overcome it together?