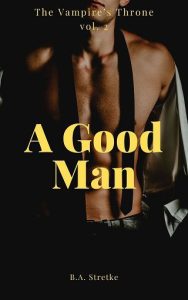 The vampire’s throne is empty, and the game is on. Everyone has to play, no matter how dangerous it gets…

Rian Brennan isn’t usually the type to attend a party like this. When Master Phillips sent the invitation, his first instinct was to decline. But that is exactly what the Assembly wants him to do. Hide away, show weakness. He is on his guard as he works the room, weighing and measuring every person and every movement. Everything is as it should be until a commotion draws his attention, and he lays eyes on a server, the most beautiful man he’s ever seen. Rian makes his move and gets him alone, and it is as clear as day, this man is his beloved. Rian knows that he can’t make his move now; he can’t show interest in Henri in this den of vipers. Rian’s enemies would be all too willing to put Henri in danger to get Rian playing their game. Rian has to come up with a plan to woo his beloved and keep him safe. Nothing is more dangerous than secrets like this…

Henri Favre was looking for a better life when he and his cousin Trent left North Carolina and their birth coven. They wanted adventure and a good life. What they found in Georgia didn’t make the trip worthwhile. Henri found a society of class distinction and himself on the bottom shelf. Henri is half-human, and all Henri has experienced is prejudice and disdain. His cousin is lucky enough to be full blood and living the high life, with nary a word for Henri. Henri is desperate to escape this life. What he doesn’t know is that his ticket out of this coven and out of the shadows is a man named Rian Brennan, one of the most feared masters in Georgia. The rumors about Rian are wild, but Henri will come to know him as one thing, a good man.

He just needs to live long enough to find out.