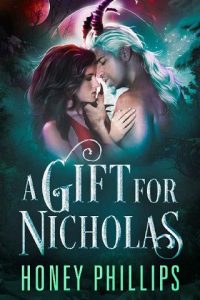 Can a single mother show an arrogant alien warrior the true meaning of the holidays?

Jenna is a hard-working single mom with no time for fairy tales. She dismisses her daughter’s stories of a mysterious horned Santa living in the woods as no more than the imagination of a precocious child – until the day her daughter doesn’t return home.
Her frantic search leads her to a crashed spaceship and a massive, horned alien warrior. He’s bossy, arrogant – and has a loneliness which matches her own.
When Ambassador Nicholsarian’s chief rival doesn’t return after the… distraction he arranged, he refuses to admit he’s concerned. But when the months pass without word, he finally sets out to investigate – only to have his own ship crash on the backwater planet of K.R.S. Three.
Before he can determine if a similar fate befell the other male, his mission is diverted by two of the most fascinating creatures he has ever encountered: a small child who shows no fear of his mighty horns, and a beautiful female who is equally unimpressed with his mighty… sword.
Trapped together by an early snowfall, Jenna and Nicholas find an unexpected comfort in each other’s company. It is the season of giving, but she has a daughter to raise and he’s looking for the fastest way off the planet – what could they possibly have to offer each other?