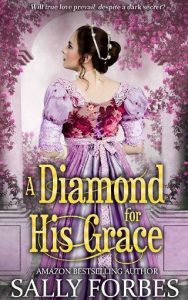 A Diamond for His Grace by Sally Forbes – Free eBooks Download

Will true love prevail despite a dark secret?

Evelina Darlington is the only daughter of Baron Selford. Evelina’s mother tragically passed away shortly after she had given birth to her. Her father has been traveling around the Far East while she has attended a prestigious ladies seminary school in Bath. Evelina is set to make her debut during the upcoming London Season, and her father has arranged for her to stay with her uncle and aunt at Searington Manor. After taking the ton by storm, she is declared the diamond of the Season.
Richard Weston, the Duke of Deansbrook, has decided to attend the upcoming Season. His late father made him promise that he would someday marry for love. When he lays eyes on Evelina at his sister’s coming out ball he feels an instant attraction to her. Could she be the love of his life?
Richard and Evelina soon start courting, but an outside force will do anything to tear them apart. Will Evelina and Richard’s blossoming love be able to withstand the obstacles in their way?