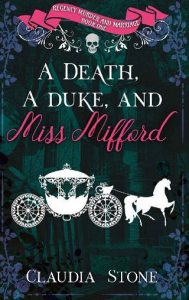 After an unsuccessful season in London, Miss Mary Mifford has returned to the village of Plumpton determined to be the most upstanding spinster the Cotswolds have ever seen. Not even the arrival of the elusive Duke of Northcott can distract Mary from her plan; until the local rector is found bludgeoned to death and Mary is named as the prime suspect. When Northcott offers to assist Mary in finding the culprit, she does not think for a second that his motives have anything to do with marriage – but as the list of suspects grows longer, Mary and the duke grow closer and closer, and she begins to wonder if she is not such a determined spinster after all.

Henry William Lockheart, Sixth Duke of Northcott, has returned to his ducal seat, determined to attend to the estate he has neglected since his father’s death. Nothing shall distract him from his plan, he thinks, until something – or rather someone- does.
Miss Mary Mifford is hardly the ideal candidate to be his duchess – given her lack of wealth and connections, along with the bothersome fact that she is the prime suspect in a murder – but Henry is smitten. Determined to help the young lady, Henry throws himself into investigating the death of the rector, Mr Parsims, hoping to clear her name.

With a long list of suspects, Henry suspects that the task might be difficult; though it might prove easier to solve a murder than to convince an earnest spinster that she should be his bride…