Home
Fantasy
A Curse of Shadows and Ice by C.A. Maura (ePUB) 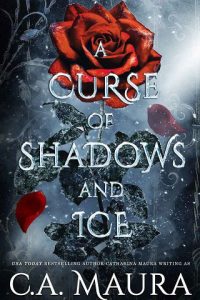 A Curse of Shadows and Ice by C.A. Maura – Free eBooks Download

From bestselling author Catharina Maura comes a Beauty and the Beast retelling featuring a cursed emperor, a princess who possesses forbidden magic, and a marriage that could save them all.

Princess Arabella of Althea is left no choice when Felix Osiris, the Shadow Emperor, threatens to overthrow her country unless she agrees to marry him.
When she learns his empire is cursed and she’s destined to set them free, they come to an agreement: help him minimize the curse’s effect on his people, and he’ll let her go.
As Felix teaches Arabella how to control her forbidden and volatile magic, her feelings for him turn from hatred to passion… and she realizes that she must break the curse, or she’ll lose him forever.

Publisher’s note: this novel was previously included in the Once Upon a Broken Crown anthology under the title Broken Beauty. It has since been rewritten and retitled.