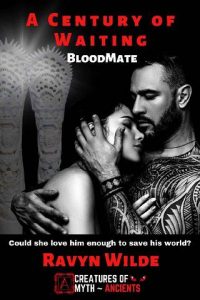 One of three races who require blood to live, the Dhampir use the Goddess Bones to find their one true Blood Mate. But the bones have been missing for over a century and their race is nearing extinction.

When the Bones reappear, the modern woman chosen to be the first Blood Mate in over a century… refuses her fate. Jessica plans to destroy the Bones, ensuring that no other woman will be forced to endure the barbaric rituals.
Lukian is supposed to have only two purposes in life. Fight the Dark Fae to keep them from destroying mankind – and find a Blood Mate to create more warriors. Without the Goddess Bones he has endured more than a century of waiting, as they’ve all been unable to find a mate and breed.
Now the Goddess Bones have gifted him with Jessica. But the rules were changed for Lukian. No longer can he lock his mate in the castle and wait for her acceptance. This is a modern world, one where the Dhampir will need to entice their mate to their side.
Jessica enjoys Lukian when he is away from the castle but refuses to be the Dhampir hope – until she is captured by their mortal enemy. She soon realizes the Dhampir are the only beings standing between the evil plans of the Dark Fae… and humans.
Now what the hell is she going to do?
The only thing she can do. Change their world.