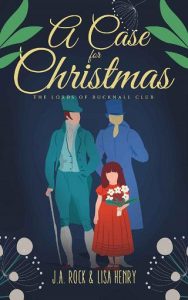 He loves no-one and never will.
Lord Christmas Gale is a genius and a misanthrope, and, quite to his disgust, adored by all of Society for his capacity to solve mysteries. When a man approaches him seeking help in locating a lost dog, Gale rebuffs him. But what begins with a missing dog ends in murder and intrigue–two of Gale’s favourite things, if it weren’t for the orphan that comes attached to them. Oh, and Benjamin Chant.

He has sworn to never love again.
The Honourable Mr. Benjamin Chant isn’t sure how he got swept up in Gale’s mad investigation, but there’s something intriguing about the man–a vulnerability that most of the world doesn’t notice, but which captures Chant’s interest, and his sympathy, from their first meeting. After a disastrous love affair in the past, Chant has sworn to never give his heart away again. Especially to a man who does not want it.

But it isn’t just their hearts at stake.
When their investigation takes a dangerous turn and their lives are threatened, both Gale and Chant are forced into the realisation that perhaps two imperfect men might fit perfectly together–that is, if they can outwit the killer who is intent on seeing them both dead.

A Case for Christmas is the second book in the Lords of Bucknall Club series, where the Regency meets m/m romance