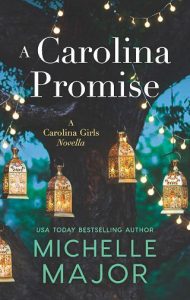 Of all the nail salons in all the world, why did he have to come into hers?

Manicurist Holly Adams may not have much going on in her love life, but when it comes to doing nails, there’s no one better. Which is why, when her newest client turns out to be dashing new US senator Brett Carmichael—of those Carmichaels—she’s so intimidated that she can barely look up from her manicure scissors. But he charms her out of her shyness and eventually becomes a regular. Despite her attraction to him, Holly knows nothing can come of it. He’s a national political star, while she…barely graduated from high school.

The last thing Brett Carmichael thought he needed was a manicure, but when he meets lovely Holly, he considers it the luckiest break in his life. As their connection grows, he knows he’s falling in love—but he also knows that even though the difference in their backgrounds doesn’t bother him, Holly is bound to see it as a deal breaker.

When it comes to a relationship between a girl from nowhere and the heir to the country’s biggest political dynasty, can love truly conquer all?