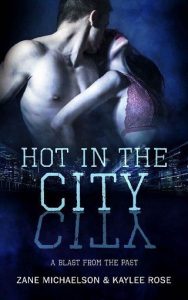 A Blast From the Past (Hot In the City #2) by Zane Michaelson, Kaylee Rose – Free eBooks Download

For Roman, sexual gratification is the ultimate high; addictive and all-consuming. It must be attained, no matter the cost to himself or the Blackthorne family reputation.
Considered by many to be handsome, arrogant, and tough, within him sits a ruthless determination to succeed, no matter who he steps on to achieve his goals.
But at the forefront of his actions lies the need for praise, and what better way to stroke his out-of-control ego than to seduce the lonely, bored housewives of upper-crust society and occasionally their willing daughters, amongst others.
Not averse to broadening his horizons, Roman plays the field while refusing to use gender as a barrier to halt winning the ultimate prize; the hedonistic pursuit of pleasure and sensual self-indulgence.
Garrett Samuelson: He’s on the hunt to relive red-hot moments from his past and there is only one man he can think of; the one that got away. He seeks out Roman, and under false pretences, lures him to a business meeting. But Roman has his own issues to deal with, and while he isn’t in the mood to be manipulated, he plays the game to satiate his own needs.