Home
Fantasy
A Betrayal of Storms by Ben Alderson (ePUB) 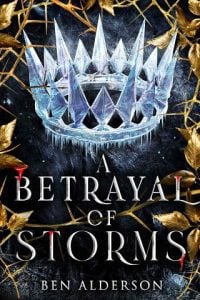 Wychwood, the realm of the fey prepare for war against the humans who hate, hunt and kill them for coin. Aided by the unclaimed, destructive power of the murdered, forgotten Winter Court, they ready their numbers for complete domination of the human realm.

All until Robin Vale reveals himself to be the last Icethorn heir. A hope for the humans he has grown up amongst, but to the detriment of many who would see him dead before ruining their years of preparation.

Robin finds allies during his discovery of a realm he has long since feared. Gideon, a fey warrior who aids as a distraction during the long nights. Althea, a stern princess hellbent on stopping the human hunters from killing her kind.

Thrust into a world of betrayal, murder and lies he must survive long enough to have the choice; listen to fate and claim his families power, or let it wreak havoc on a realm that turned its back on him for becoming who he was truly meant to be.

But a dark evil is brewing, monsters have returned and the scales of power are being forced by a hand who longs for revenge.