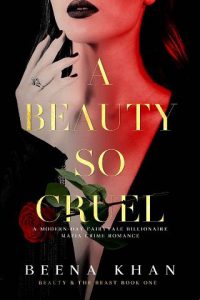 I was a beauty, a stray orphan until the beast took me as his hostage.
Once upon a time…
A Don by the name of Vlad Vitalli ruled New York.
He’s a mafia man. The leader of one of the five ruling families, La Cosa Nostra. He’s a monster. A trained killer and a cold-blooded murderer. Tall, mysterious, with icy gray eyes, and he rarely smiles. He’s a criminal. Ruthless, cold, dangerous, and is going to kill me.
I was the wrong person at the wrong time.
An innocent at the masquerade ball but I witnessed a murder. The mafia has rules: no witnesses left behind. To save my life, I made a deal with the beast. I handed myself to the cruelest man in the kingdom.
For him, It was supposed to be an easy kill. I’m an orphan raised in poverty. Just as Don Vlad was about to order the hit, I threw off my masquerade mask, revealing my face, and offered myself to him. One look and I was doomed. He took me as his hostage. His captive. He didn’t know by taking me, Dahlia Hadid, he sealed his own fate.
Welcome to New York’s Underworld.