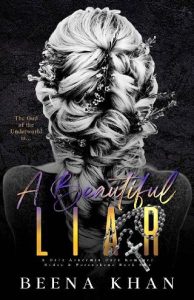 I gave Hades a fake name at the club, and now, he’s chosen me as his mate.
Once upon a myth…
I’ve always been sheltered by my overprotective mother, hence the nickname given to me by my tormentors. “The nun.” As a geeky scholarship student at the ancient and prestigious Saint Eudora Academy, I craved freedom, so, I sneaked out into the nightlife for the first time to mend my broken heart. There, I met a pair of alluring blue eyes and our worlds collided leaving nothing but destruction in its wake.
It was a single night, and we both wanted to forget someone. He said, I have six months before he returns. Six months to tell my old life goodbye. In my drunk state, I agreed, and he declared us as betrothed. The next morning, I ghosted him.
Imagine my surprise when I see him at my academy six months later. He’s returned like a raging inferno to claim me.
The connection and recognition are still there. He was supposed to be a myth. The man before me now is different. He’s tortured, dark, and deadly like Hades. A sense of danger surrounds him, trapping me toward him. I don’t know what he is capable of until a favor from the reaper and a chilling murder forces us to bond.
I fear the unknown ahead of me when I finally unmask him. I’m entangled in a web of secrets and lies where money and power rule in his dark world. He says he collects souls, and now he is here to take mine.
Valerius Vitalli will never let me go.