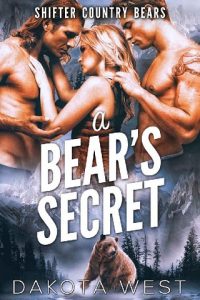 Sloane Garcia is fed up with living by other people’s rules. When she loses her job and her boyfriend all at once, she hits the road to fulfill her dream of hiking the Pacific Crest Trail. From Canada to Mexico, Sloane’s got five straight months of time alone to find herself – unless someone else finds her first.

Austin Leeds is keeping a lot of secrets, and not just his own. For instance, why is the bear shifter working at the Double Moon Ranch – his bosses are wolves, and the two shifter types don’t usually play nice.
But Austin knows that fate can have a cruel sense of humor. After all, he has to tell people he’s single and unmated, no matter what the truth might be.

Heading to spend a few nights in a real bed at the Double Moon Ranch, Sloane finds a man in the woods, just off the trail. He’s unconscious and has a syringe in his neck, and there’s not a single clue about who attacked him.
As the mysteries and lies unravel, the truth begins to shine through. Austin can’t keep his secret any longer – not if he’s going to keep Sloane safe, and protect his only real shot at living happily ever after with his two fated mates.